Las Vegas is showing off some fancy new signage and it’s not on the Las Vegas Strip. The city recently debuted “Wedding Row” in the iconic Downtown Las Vegas area. In celebration of Wedding Row, a set of new banners honors Vegas’ wedding industry and further solidifies it as the Wedding Capital of the World.

What Is Wedding Row?

In all, a dozen banners showcase couples tying the knot and are displayed prominently among the wedding chapels in Downtown Las Vegas. This includes locations for quick ‘I Dos’ for locals and tourists and those publicized internationally for celebrity vow exchanges.

“We are beyond excited to present Wedding Row as a charming addition to Downtown Las Vegas,” said Las Vegas Mayor Carolyn G. Goodman, who herself celebrated 60 years of marriage to former Mayor Oscar Goodman. “It honors our city’s history and the wedding industry in every way.

Las Vegas is arguably the most iconic destination on the planet to get hitched. Couples looking to get married come from places as far as half the globe away to just down the infamous Las Vegas Strip. With over 5-million licenses being issued as of early 2022 it is simple to see why the city is known as the Wedding Capital of the World.

When it comes to weddings, Las Vegas has choices galore. Play out your first moments of wedded bliss in the classic chapels with traditional offerings, or be outrageous with your dream wedding and make it an entire production—this is Vegas after all.

In this little desert city your perfect wedding awaits. In fact, couples looking to make it legal can get a license 365 days a year, including all holidays. There are even options during certain times of year to get hitched at the airport

A Row Where the City Grows

“Las Vegas has hundreds of weddings every week and we hope this project will help support our chapels and surrounding businesses as they celebrate true love,” said Olivia Diaz, Ward 3 Councilwoman. 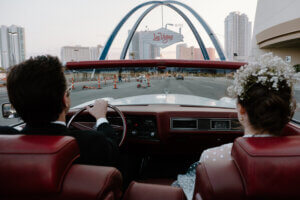 How to Have the Perfect Mid-Century Modern Las Vegas Wedding

Is Betty Draper or Frank Lloyd Wright your spirit animal? Las Vegas has venues for you.