A Walk Down Memory Aisle

Creating the Wedding Capital of the World

The Easiest State in the Nation to Get Married

In the 1930s, Nevada relaxed marriage laws making it the easiest state in the nation to get married. Tossing the requirement for a blood test or waiting period, Nevada enticed movie stars to make the trek from Hollywood to take advantage of a simple, discrete ceremony out of the limelight. 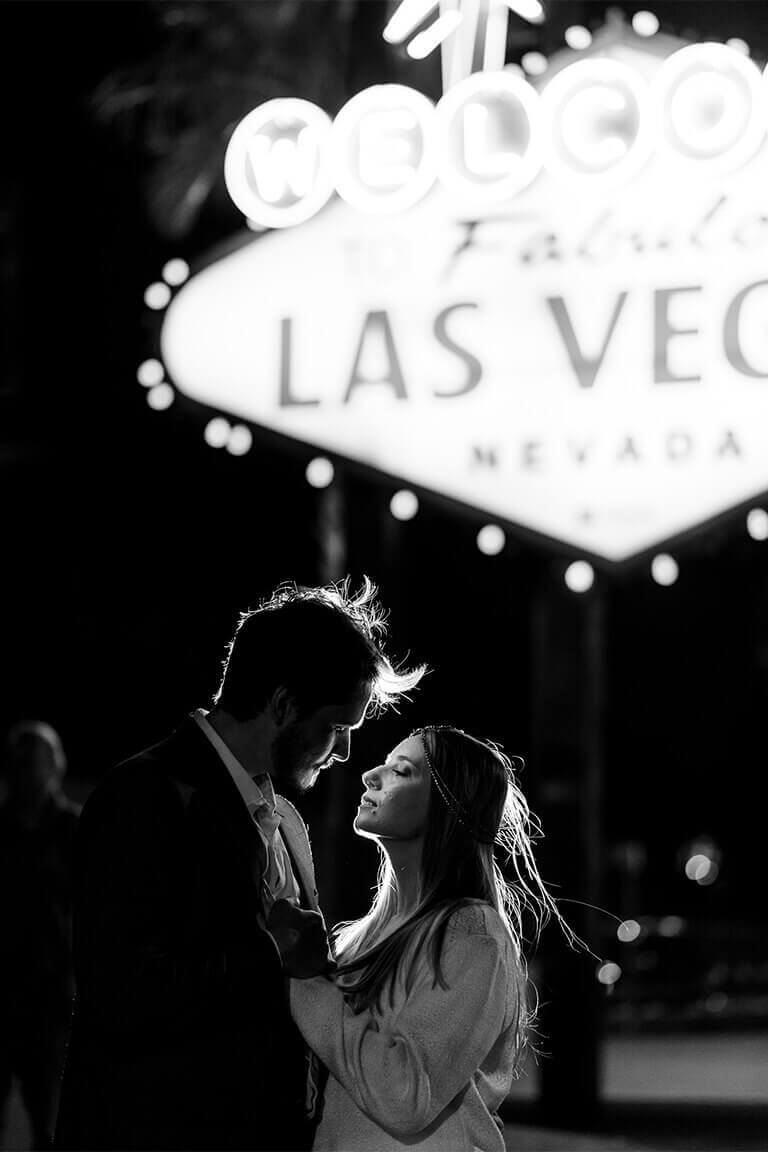 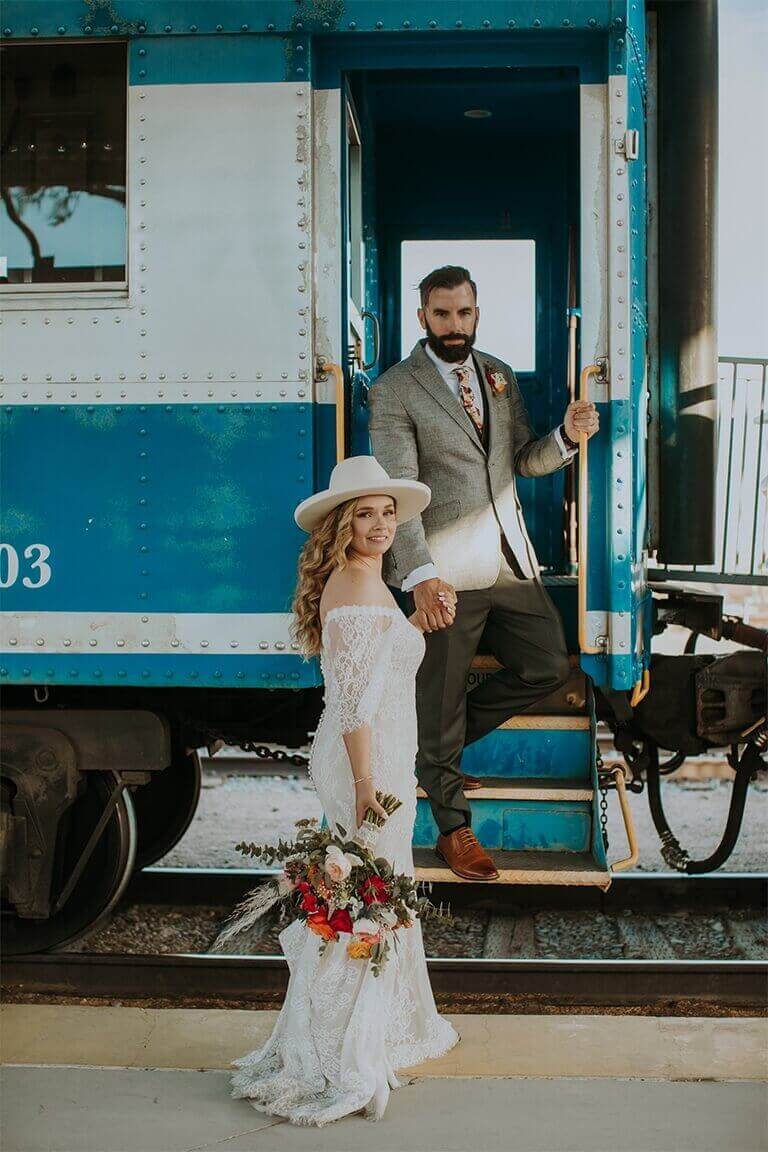 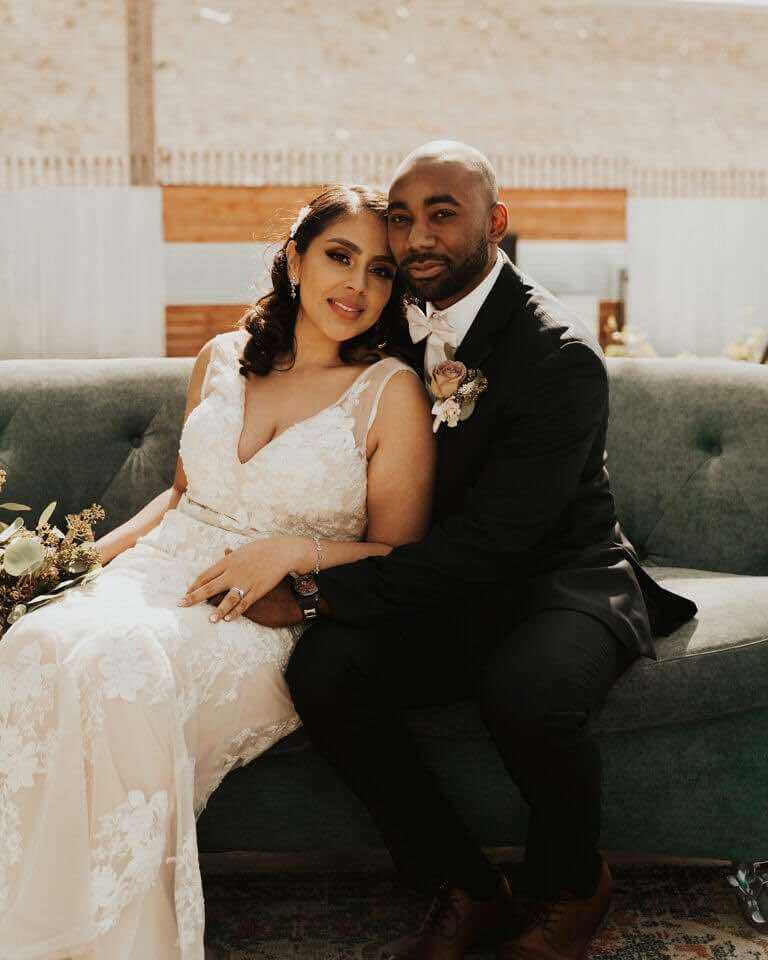 The shadow of war spurred romance, for some, as young couples from around the nation rushed to the altar to marry before being drafted during World War II. In 1942, 1.8 million weddings took place around the U.S., with 20,000 of those weddings taking place in Clark County, a 145 percent increase over the previous year.

Dedicated chapels like the The Hitching Post and Wee Kirk o’ the Heather were also born from this. The latter was the longest operating chapel in the valley until 2020 when it was torn down by an out-of-state corporation that razed it without a permit. The renowned Little Church of the West opened in 1942, becoming the first free-standing chapel on the Strip, and is listed in the National Register of Historic Places. A Little White Chapel, another iconic chapel known for the introduction of the drive-thru wedding, has been the altar for numerous celebrity weddings in addition to being featured on many television shows such as The Bachelor, Lifestyles of the Rich and Famous, the History Channel and more. 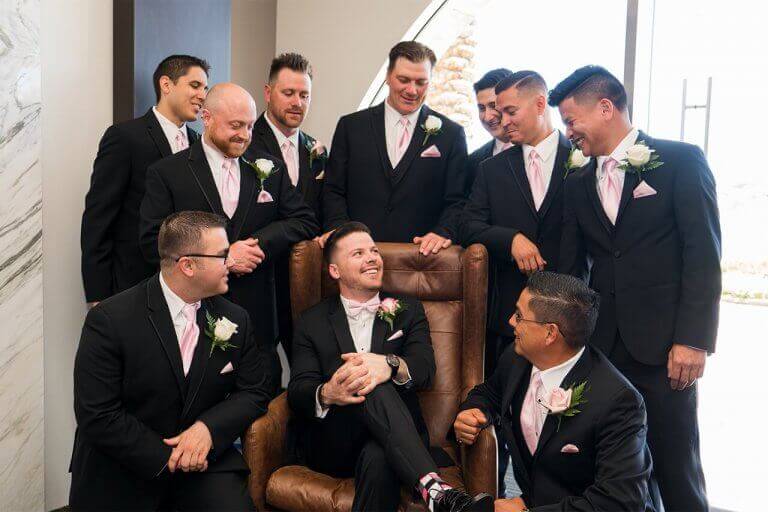 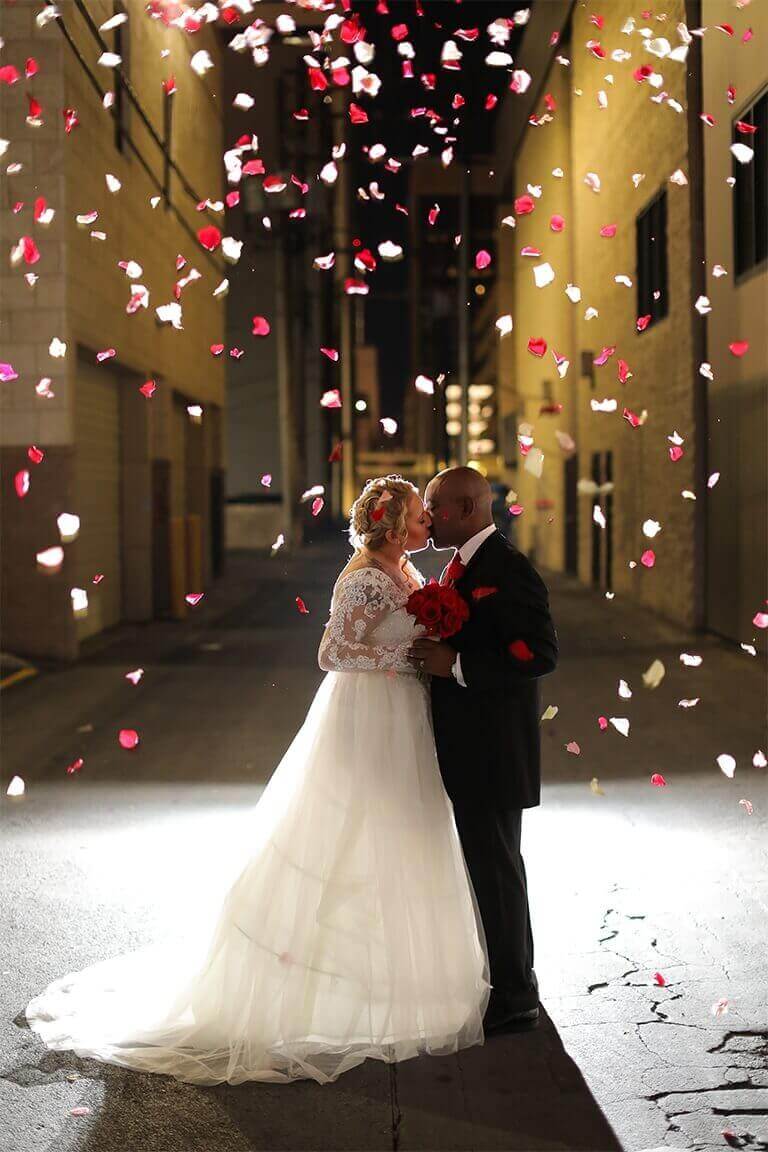 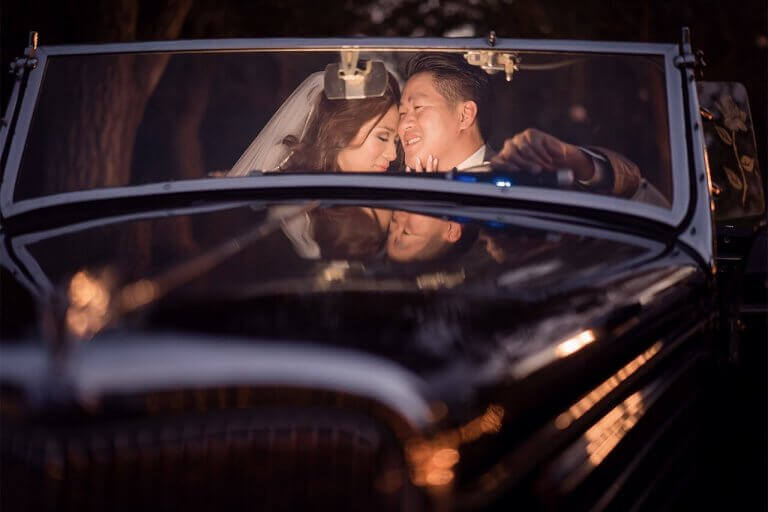 Welcome to Vegas, Baby! (We Owe It All to Sinatra)

The image of Las Vegas as cool, hip, fun, and modern can almost single-handedly be traced to Frank Sinatra who began his long-term love affair with Las Vegas when he signed onto the Sands in 1953. He brought his Hollywood friends, international fans, and conjured, almost like a genie discovered in the surrounding desert sands, the iconic Rat Pack that became the symbol of laid-back, charismatic elegance.

The town’s earliest hotels reflected the theme of the old West, but what set everyone back on their heels was the urbane chic of the Flamingo Hotel brought to life by gangster Bugsy Siegel and Billy Wilkerson, Los Angeles nightclub owners. Eschewing the dusty western theme, this hotel was designed to mimic geometric stylized forms of Detroit’s sleekest automobiles. Instead of cowboy hats and spurs, this resort invited the tuxedo, diamond, and fur set, and other sleek and sassy resorts soon followed.

The Desert Inn, the Thunderbird, the Sands Hotel all catered to the new sophisticate attracted to a city that felt like nowhere else in the world. Hotels mostly featured large, enticing swimming pools wrapped in the casual arms of a low, wide-flung resort filled with legal gaming, lounge music and endless food. As musicians, comedians, hotel magnets, and–yes, the underworld—began to call Las Vegas home. 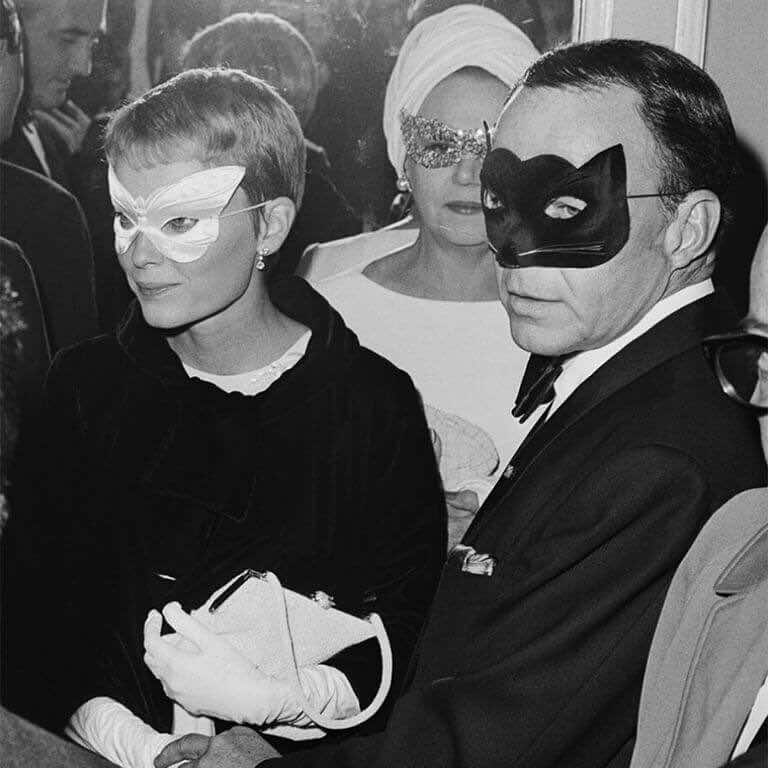 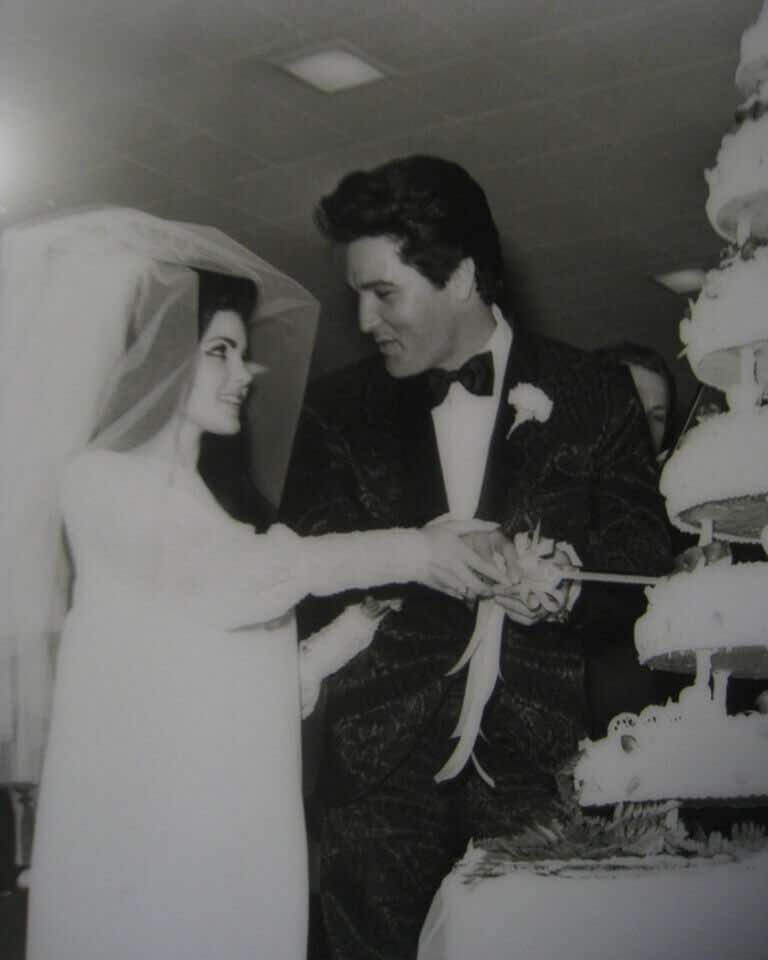 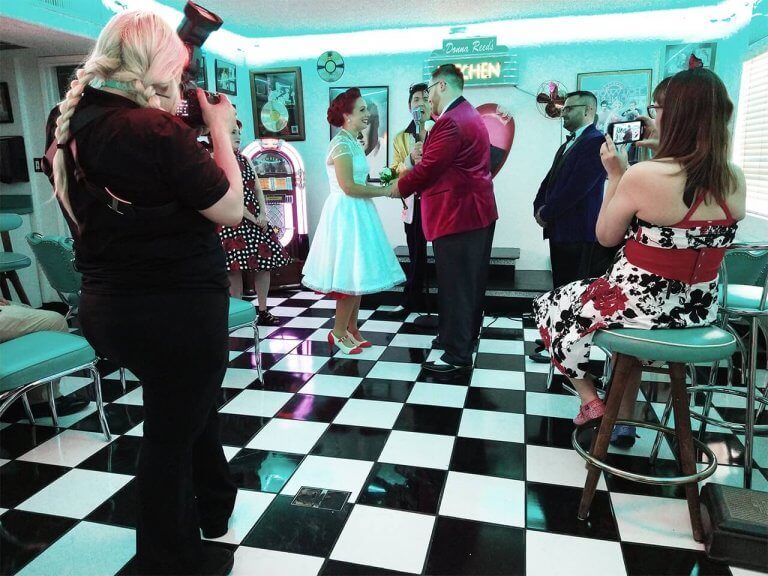 The Wedding Boom (When the Clock Couldn’t Strike Midnight)

Vegas was fresh, young, new, sexy, and inspired. Vegas understood that post-WWII couples were ready to blend the old with the new when it came to getting married. Many couples wanted something between an elopement at the local county courthouse and the elaborately staged production of traditional marriage.

The stand-alone chapel was invented to provide an intimate, traditional setting for a wedding ceremony without all of the fuss. Couples could grab their license at the Clark County Marriage License Bureau, make a quick stop at the chapel, then run to the Strip to celebrate their vows. The ‘quickie wedding’ became a Las Vegas signature. In 1965, couples flocked to Las Vegas to avoid the draft. President Lyndon B. Johnson by executive order eliminated the draft deferment for childless men married after August 26, 1965.

As the midnight deadline approached, the Marriage License Bureau was bombarded with couples trying to marry. “I came back to the office from performing a ceremony at the Dunes at around 9:30 p.m., and it was packed,” said Justice of the Peace James Brennan, who was on call that night. “I knew they had a mission to get married before midnight.” Justice Brennan performed 57 weddings before midnight that night, cutting words from the ceremony, grouping couples together, and eventually hung a typewriter cover over the clocks at 11:45 p.m., so that the clock never struck midnight. He continued his services into the early hours of the next morning, ensuring every couple he saw was married that night, no matter what. 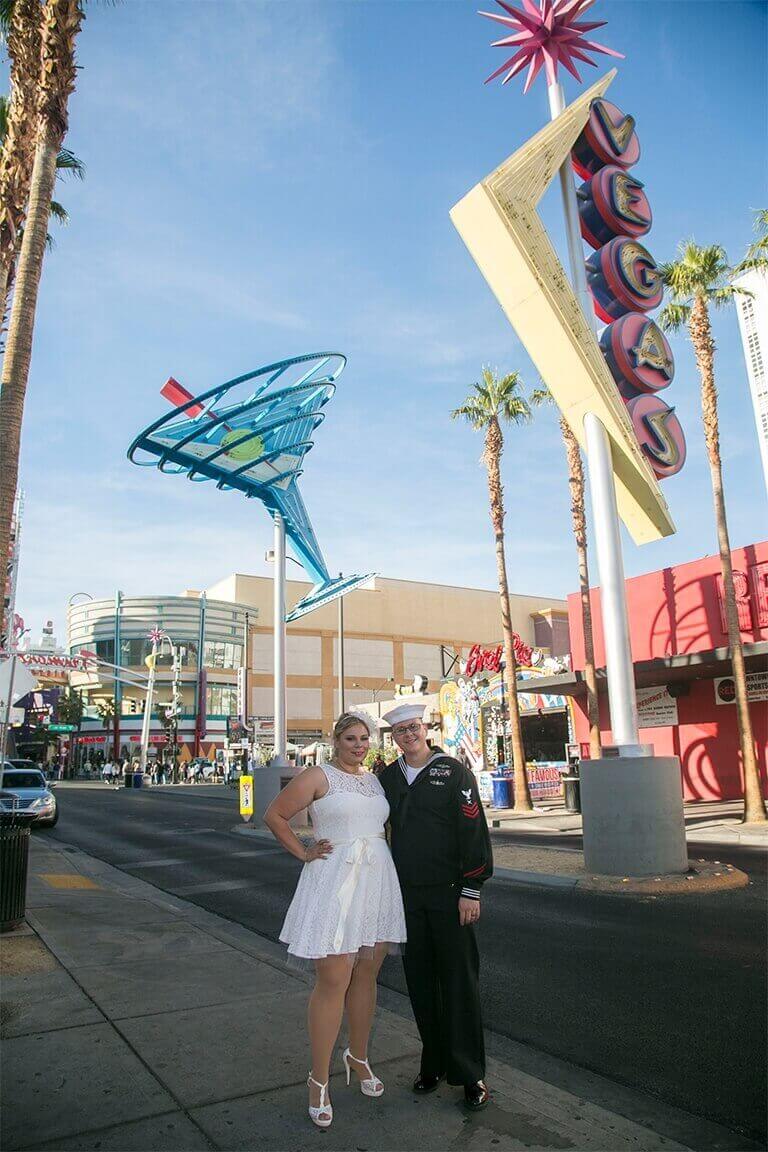 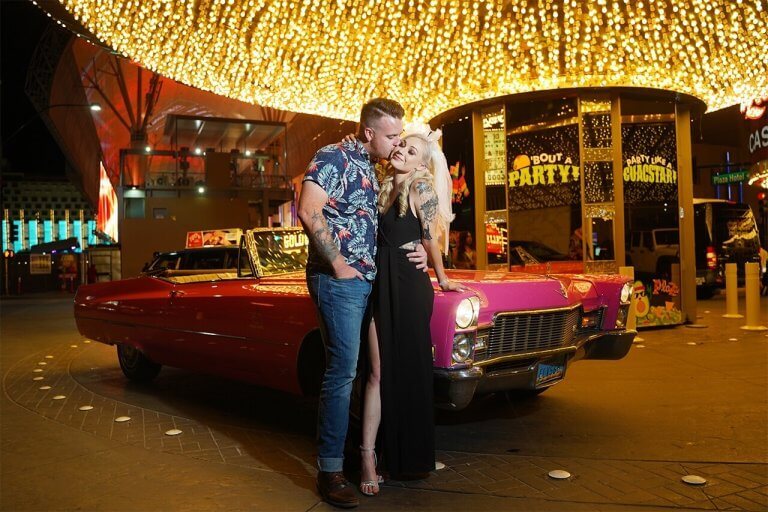 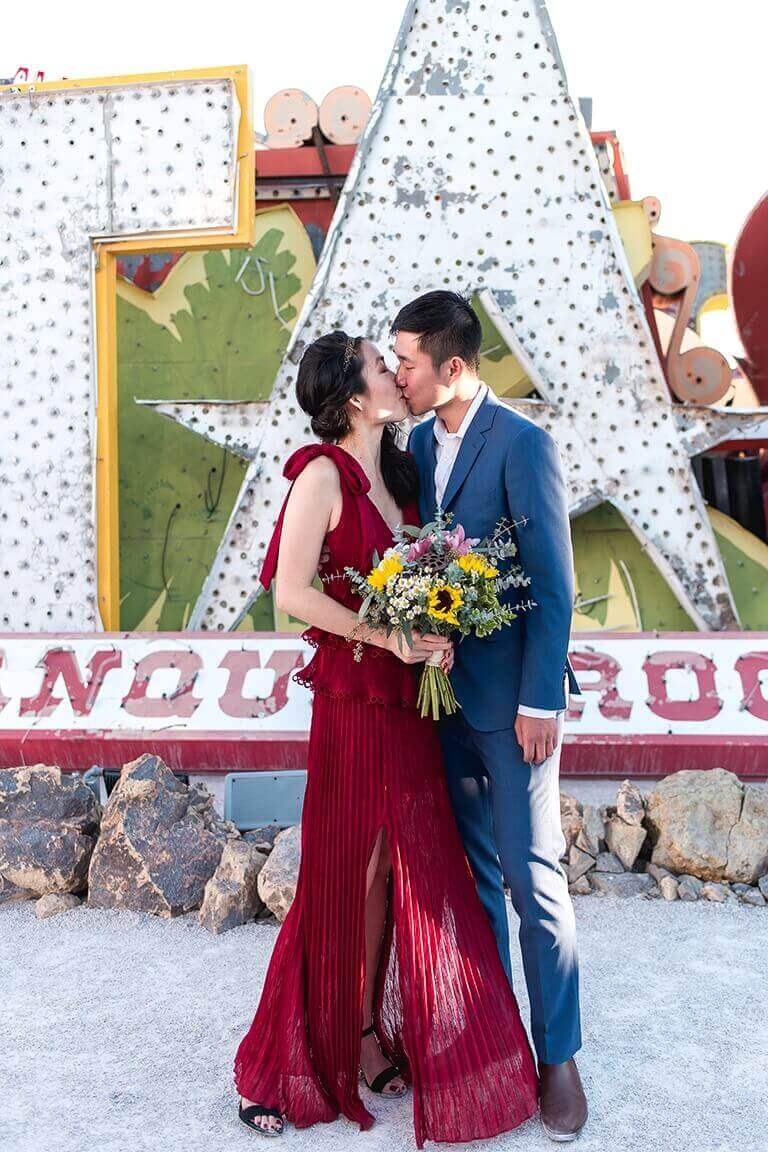 Decades of Love, Thousands of “I Dos”

By 1972, more than six million visitors came to Las Vegas—and they just kept coming. By the mid-‘80s, over 15 million people visited Las Vegas, which translated to a burgeoning demand for Las Vegas weddings. In 1995, over 100,000 couples said their “I do’s” in the city.

Behind the scenes, the resorts were soliciting celebrities to get married in Las Vegas, plying them with free services and hospitality. Non-celebrities were also courted by wedding chapels and resorts who took pictures of each newlywed, sending them to the couple’s local newspaper for their announcement section. 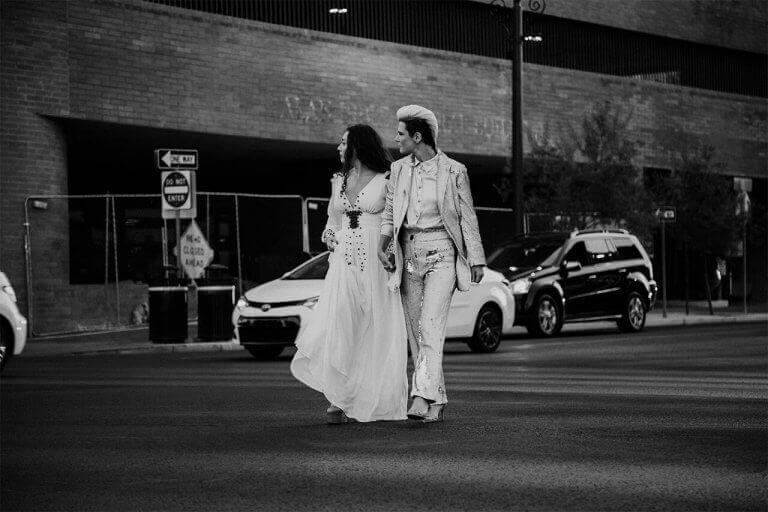 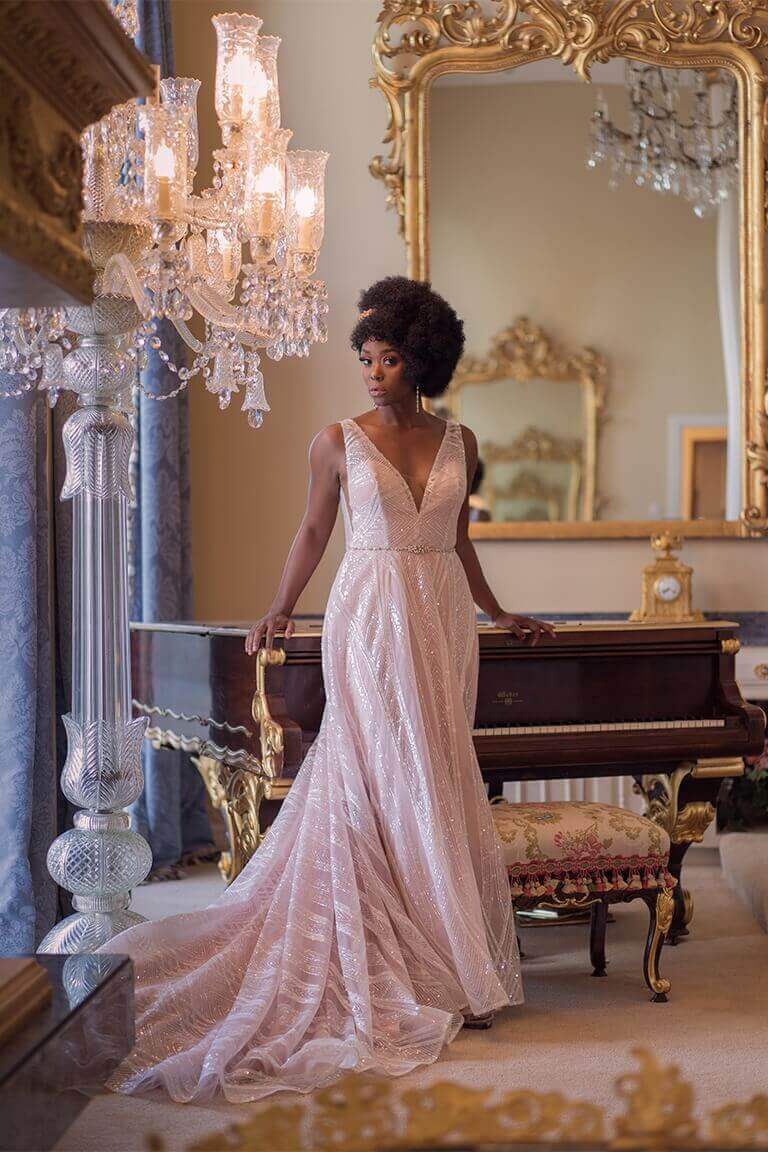 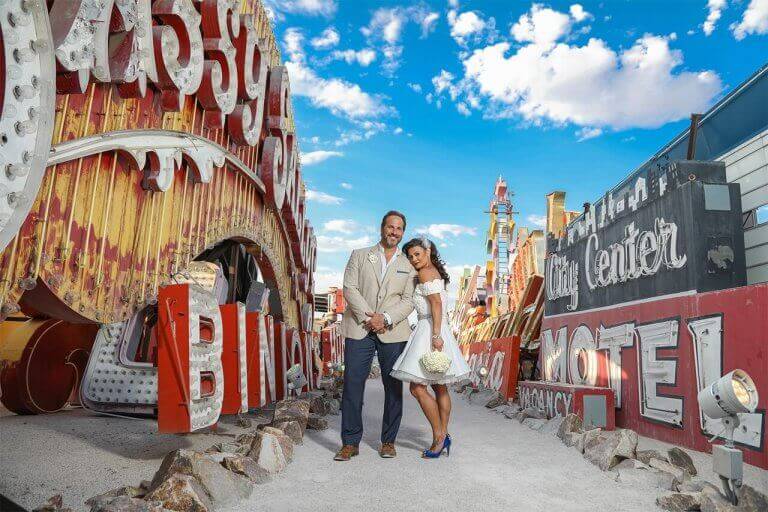 Wedding tourism is one of the most enduring economic engines for Las Vegas, generating approximately $2 billion per year in economic activity, annually. Approximately 18,000 people depend upon wedding tourism for their livelihood. Hundreds of small businesses cater to wedding couples across the city and 50 dollars from every marriage license issued funds the state’s Domestic Violence Prevention programs. In 2019, 80 percent of marriage licenses issued in Las Vegas were to tourists, and of that 80 percent, over 20 percent were to international guests.

Because weddings in Las Vegas are not an adjunct business but a thriving industry filled with full-time wedding professionals, in 2016, the Las Vegas Wedding Chamber of Commerce was founded, working alongside the Office of the County Clerk, to create unique and memorable initiatives that celebrate Las Vegas lovers. What’s more? In February 2017, the County Clerk collaborated with McCarran International Airport to create the Pop-Up Marriage License Bureau at the airport. The fully operational marriage license bureau made it a breeze for couples to pick up their marriage license during the busy Valentine’s weekend and every other day following.

Today, there are more than 75 chapels in Clark County, not including the dozens of chapels in the Las Vegas resorts or the hundreds of additional indoor and outdoor venues available scattered throughout the county. 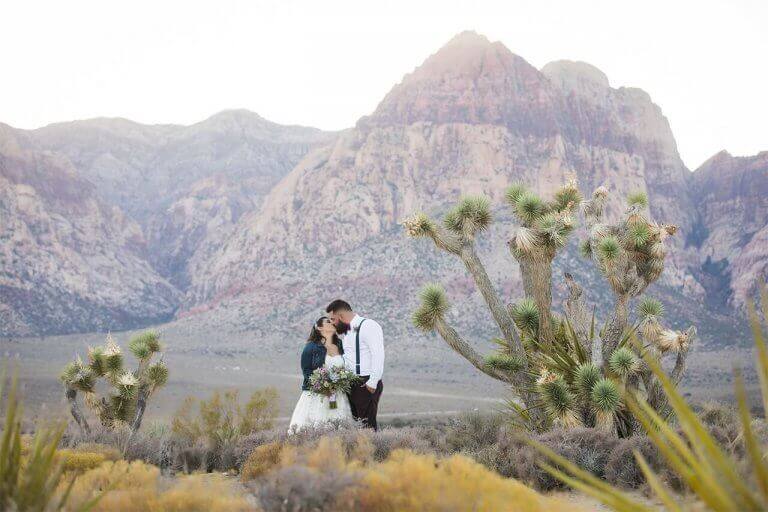 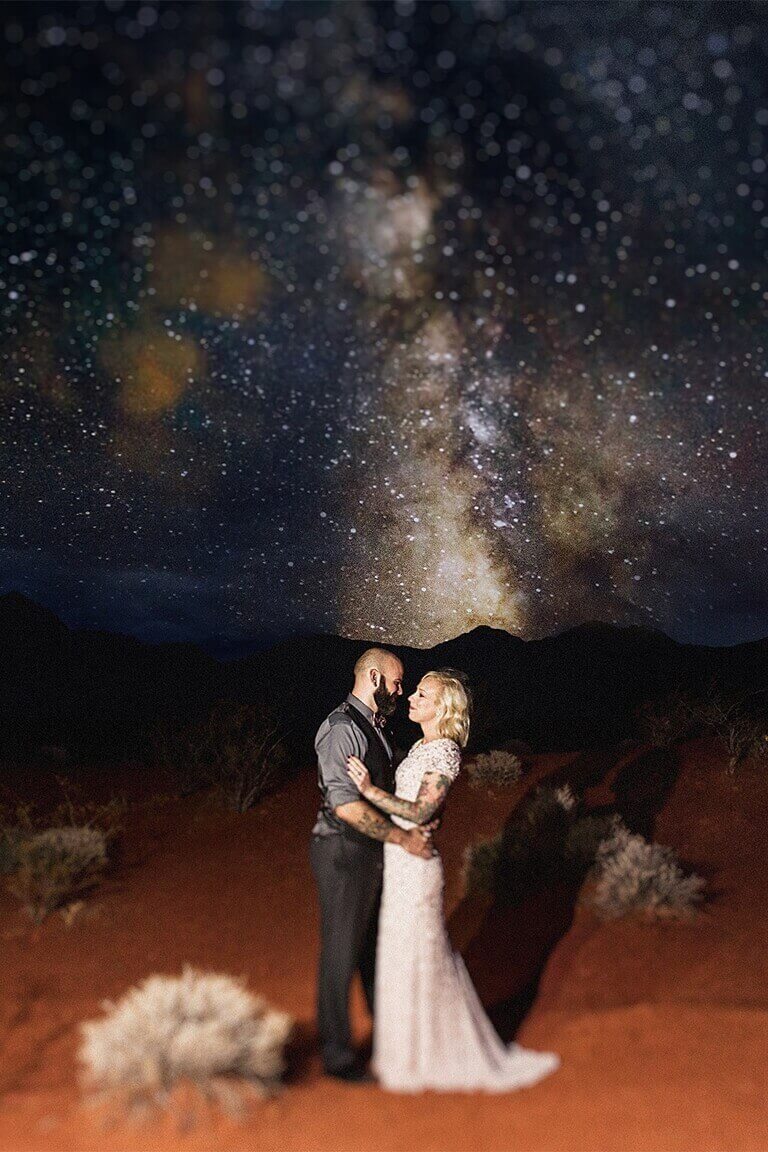 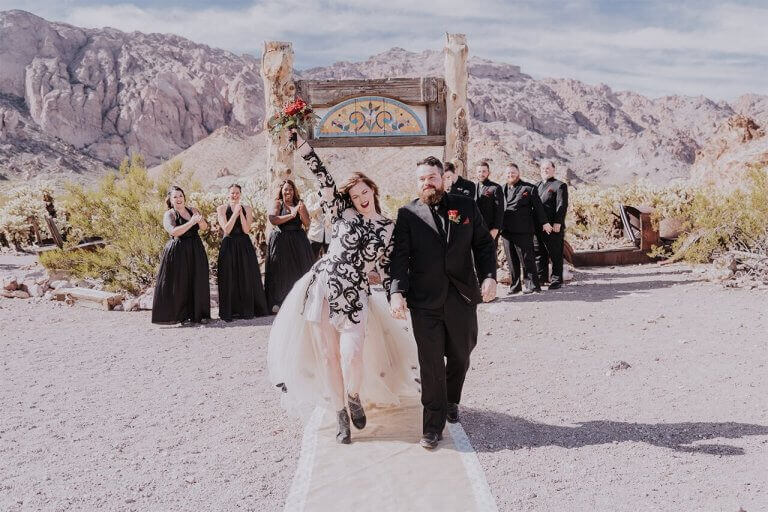 Vow Renewals — Bringing That Special Day Back to Life

You’re Still My One and Only

Vow renewal ceremonies run the gamut from intimate affairs with just the couple to full-blown events with family and friends and celebrity performers.

In 2018, Clark County became the first marriage license bureau in the nation to offer a vow renewal certificate. Vow renewals are an increasingly popular option in Las Vegas for couples celebrating their years of marriage together. Maybe their wedding was rushed, small or bare-bones and now they have the resources to truly celebrate their dream wedding with family and friends. Or, perhaps, there is a special anniversary that deserves a big wedding party. Couples from all over the world make a point to return to the same altar where they were originally married to recite their vows as if it were the first time.

Some lovebirds loved getting married in Las Vegas so much, they returned again and again. Mickey Rooney married seven times, three of which took place in Las Vegas, and Elliot Gould got married and divorced twice in Clark County, just to name a few.

Vow renewals are a frequent request for military and veterans whose deployment pushed couples into a ‘quickie’ wedding rather than the wedding of their dreams. The Office of the County Clerk along with the Las Vegas Wedding Chamber of Commerce debuted “Las Vegas Marries the Military” on Veterans’ Day Weekend in 2017, honoring members in the military by offering them free wedding services and vow renewals. The Office of the County Clerk and the wedding industry continue to work together to showcase Las Vegas and its unique wedding style. 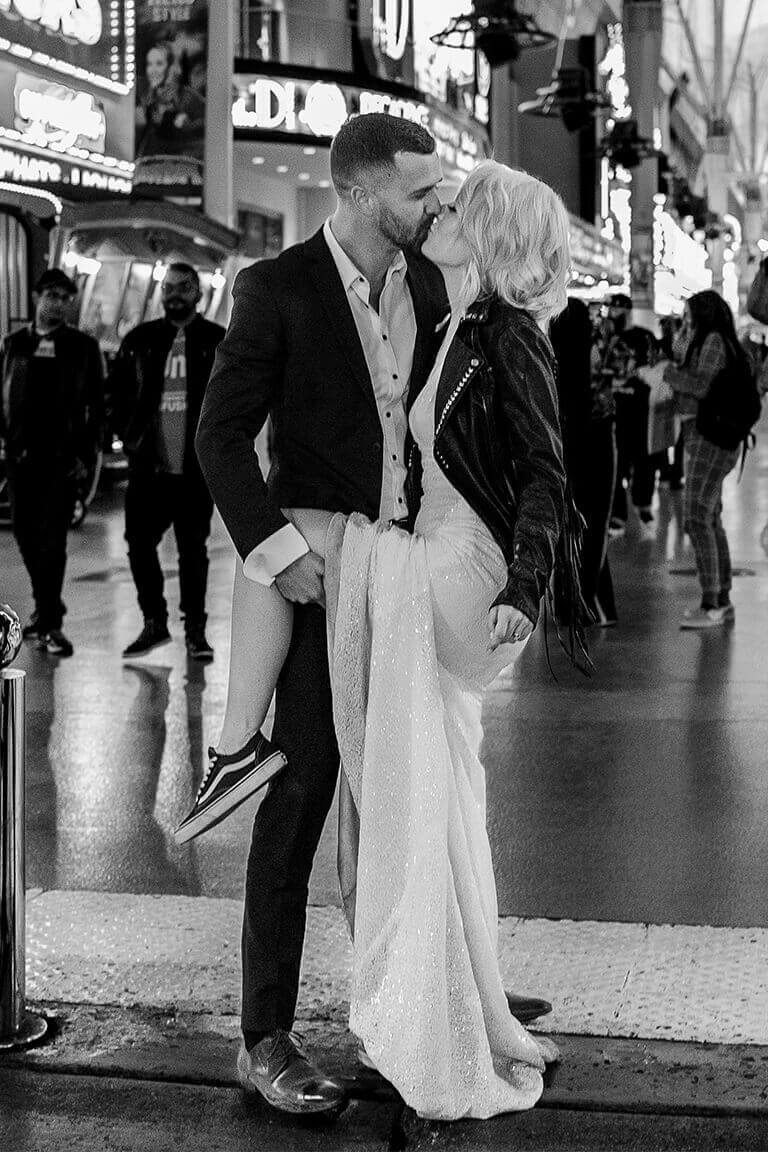 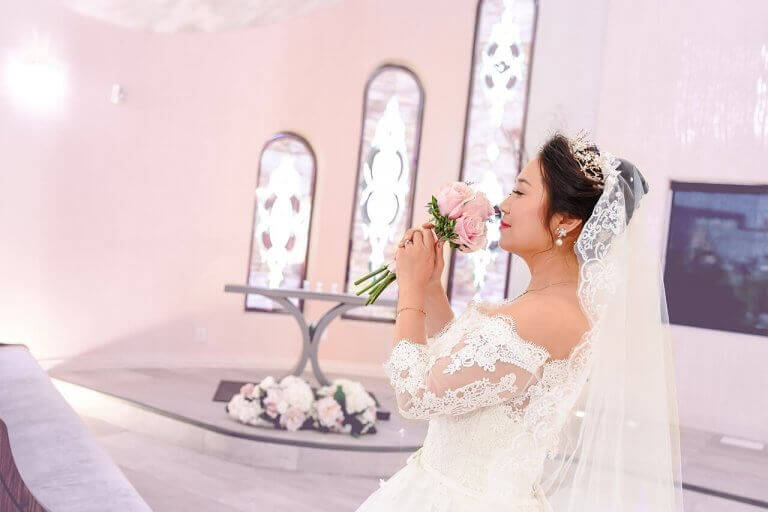 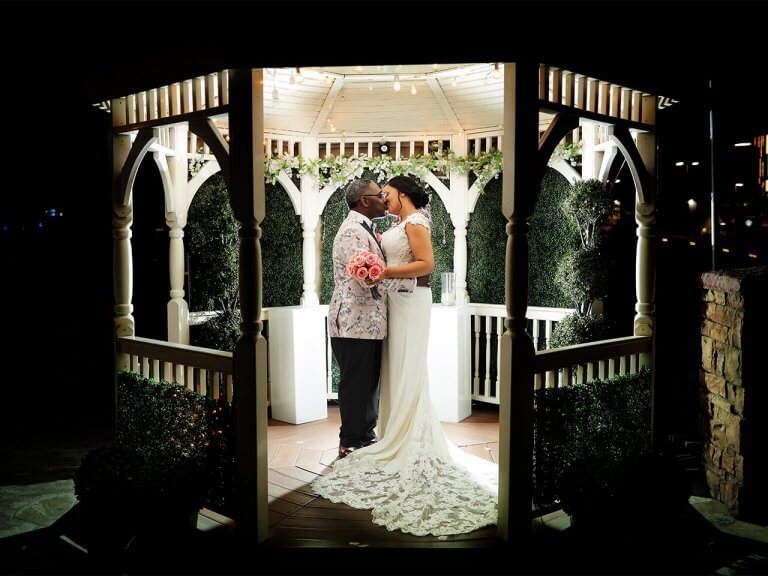 In a town known for being over the top, Las Vegas is home to a variety of chapels that will fit any taste, budget or couple. From formal ceremonies to the unique and extraordinary, Las Vegas chapels offer one-of-a-kind packages that don’t require extensive research or planning, are all-inclusive, affordable, and provide couples a smooth and relaxed experience when planning their wedding.

Whether it’s an intimate ceremony followed by a helicopter ride over the Grand Canyon, to a speakeasy reception at the Mob Museum or a virtual trip to Paris for an Eiffel Tower wedding and photoshoot, the easing of the marriage license process changed the whole shebang and made it possible for couples to marry in a way in which they pleased.

Las Vegas embraces the LGBTQ+ community from all around the world. Since same-sex marriages became legal nationwide in October 2014, Clark County has issued more than 30,000 same-sex marriage licenses, celebrating key milestones along the way. 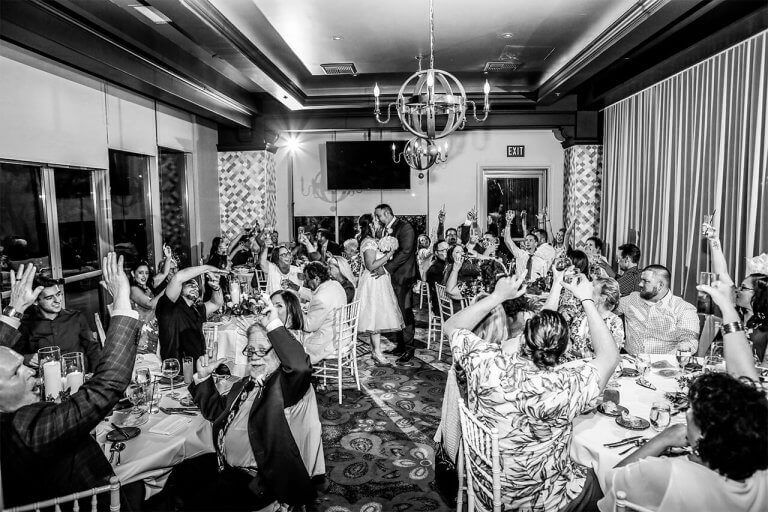 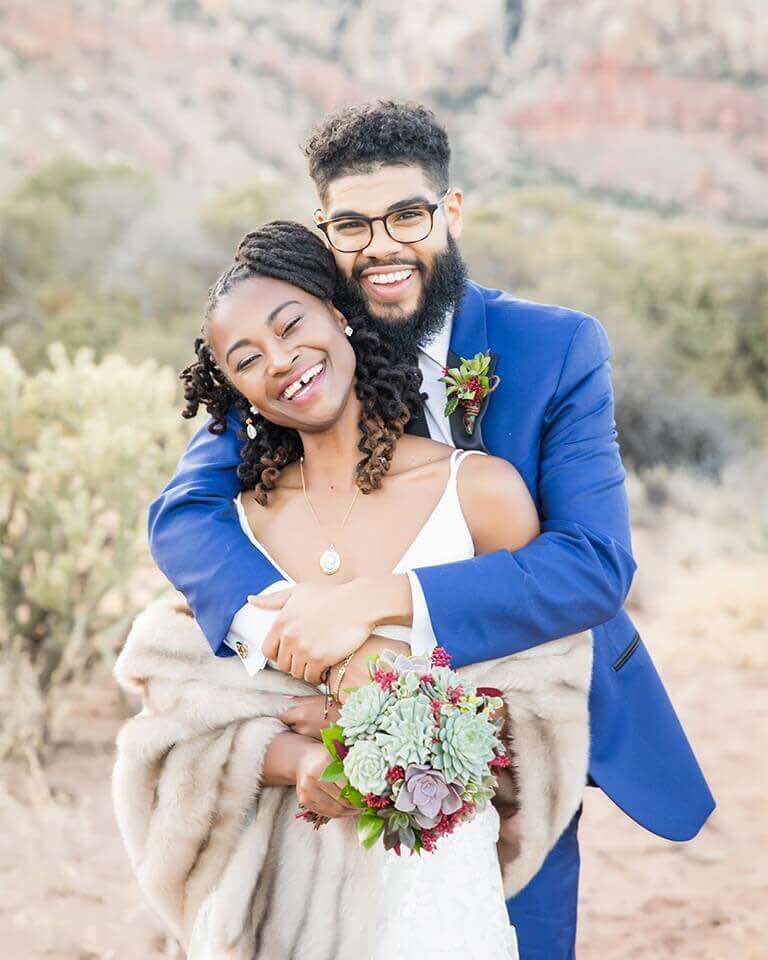 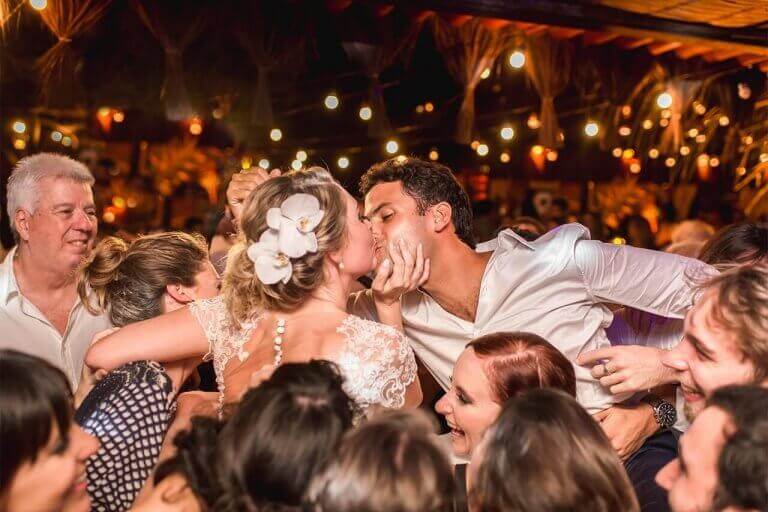 Weddings of the Rich and Famous

Las Vegas is no stranger to the hottest celebrities then and now, hosting more than 300 celebrity weddings throughout the years.

Celebrities are flocking to Vegas again. In 2019 alone, 26 celebrity marriages took place in Clark County, the most in recent years. Among those was the surprise wedding of Joe Jonas of the Jonas Brothers to “Game of Thrones” star Sophie Turner at the Little White Chapel with none other than ‘Vegas Elvis’ Jesse Garon as their officiant.

Celebrities getting married in Las Vegas continued throughout the years, hosting a wide variety of marriages, some short-lived unions, a few returning brides and grooms and countless ever-lasting loves. One of the most iconic and newsworthy weddings was Elvis Presley and Priscilla Beaulieu on May 1, 1967. The intimate wedding took place at the Aladdin Hotel inside a suite in front of 14 people. Elvis and Priscilla stopped by the Las Vegas Courthouse just before 10 a.m. that day to obtain their marriage license, then headed off to the hotel and a ceremony that was officiated by Nevada Supreme Court Judge David Zenoff.

There are no signs of stopping when it comes to celebrity weddings in Las Vegas. Long-married  celebrities that have tied the knot in Las Vegas include Kirk Douglas and Anne Buydens, married May 29, 1954; tennis stars Andre Agassi and Steffi Graf, married October 22, 2001; musician Jon Bon Jovi to his high school sweetheart Dorothea Hurley, married April 29, 1989; TV stars Kelly Ripa and Mark Consuelos, married May 1, 1996; among numerous others. We can only hope that our newest celebrities enjoy equally long and happy lives together. 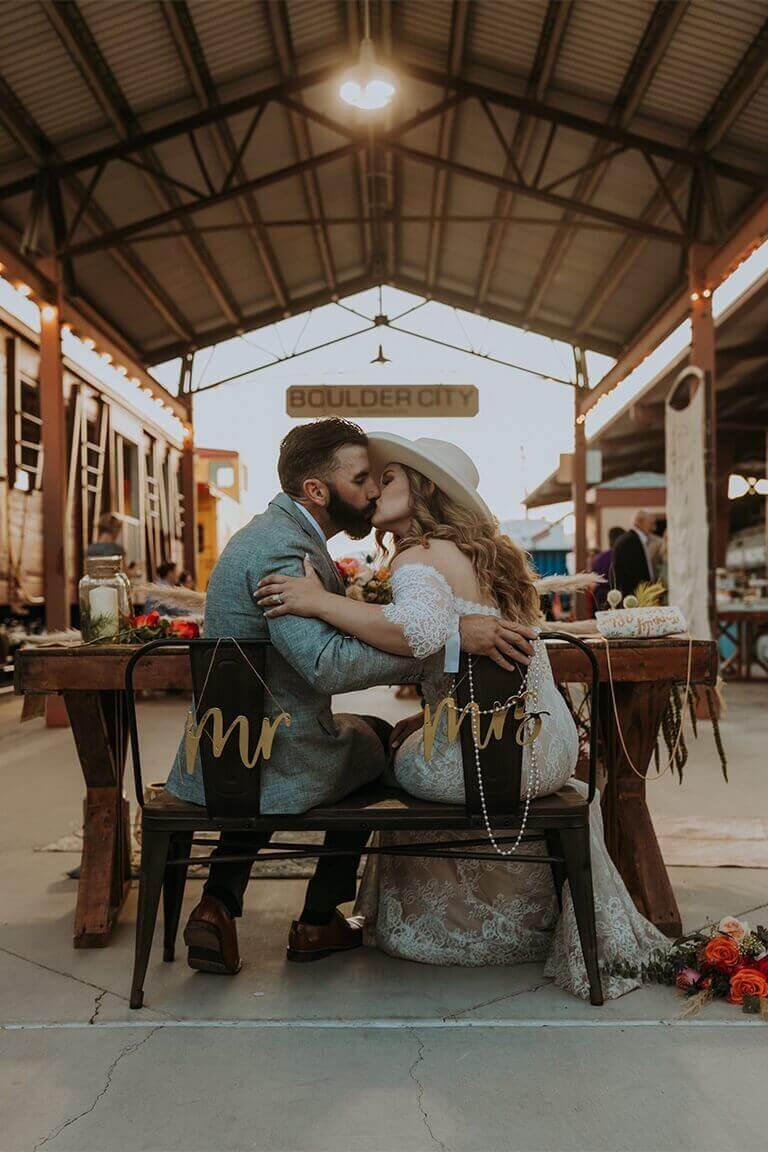 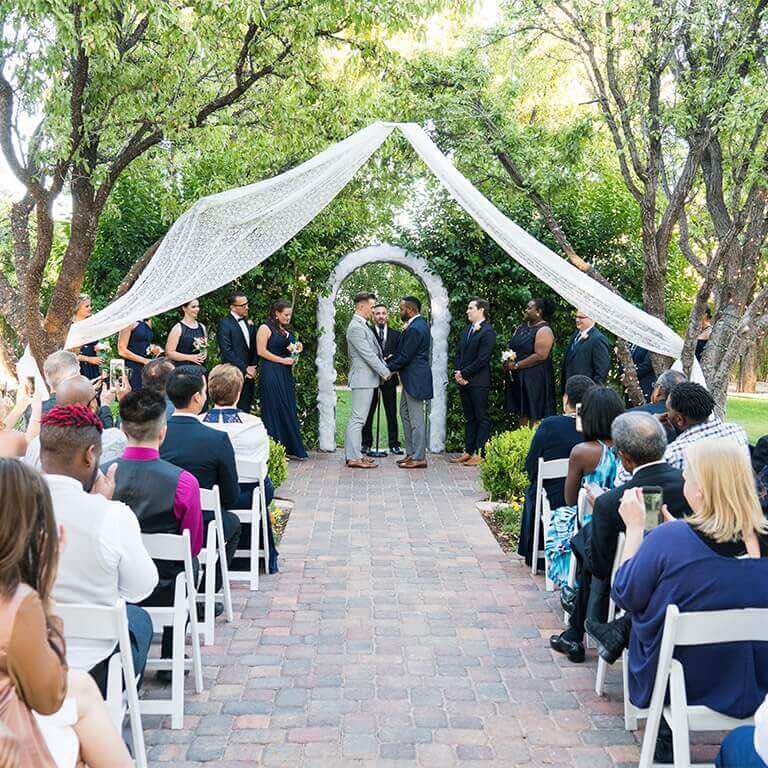 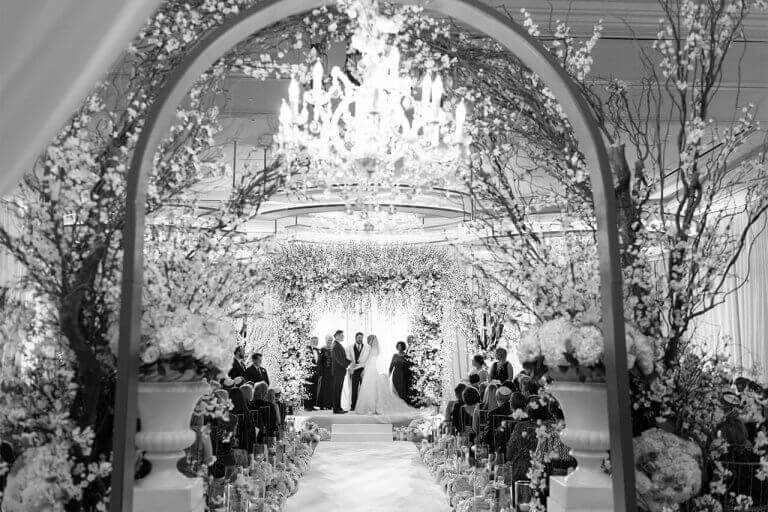